Speaking of the weather...

Which is about all Coloradoans are talking about these days.

I’d sure love to see one of these rainbows real soon. A double rainbow like this one from a few years ago would be an extra bonus. 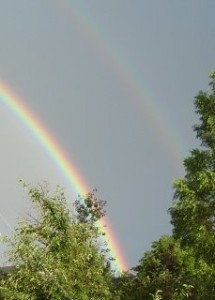 Colorado is known for the number of sunshiny days each year…but we’re seriously falling behind for 2015. I could never live in a place where it rains this much on a regular basis. As I’ve mentioned on other social media sites, I think I run on solar power. It has rained twenty-one days in May, and this is just the 23rd. My batteries are dead. I’m just a lump in my favorite easy chair, doing nothing but reading books and thinking about food…comfort food.

I read Vanished by Joseph Finder and all the way through kept having the feeling I’d read all or part of it before. In spite of that, I enjoyed it and had no recollection of the ending.

Just finished Anthony Doerr’s Pulitzer Prize winning novel All the Light We Cannot See. It’s a good story which I would have liked even better if the events had unfolded in chronological order. That aside, it has lovely detailed descriptions, interesting passages of straight narrative in places, and held my attention through the 500+ pages. This is another book about World War II and the people who suffered the most. The whole novel leads up to once chance encounter between the two main characters. It’s an emotional novel, but then, war is an emotional subject to write about. I read it in four days.

Yesterday I began reading a YA novel, Mosquitoland, by David Arnold.

The good news: I’m now able to put full weight on my right foot. I’m using my cane for a little extra stability, especially when climbing stairs. And I go back to the crutches if I have to be on my feet very long.

The bad news: I had no idea using this walking boot would cause so much discomfort to my lower back. I walk lopsided, and standing is worse than walking. It’s not the boot’s fault because it’s very comfortable and has kept my foot safe while I gradually began putting weight on it. The problem is that I don’t have a shoe with a thick enough sole to keep me balanced.

This is the boot I have. An Ossur Air Equalizer. 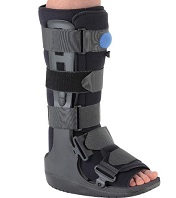 The best news: If my foot X-rays are good on Wednesday, I’ll be able to stop wearing the boot and put on a pair of regular shoes for the first time since about March 10th. I am so ready!

Adventures with the Crock Pot

Yesterday I put two boneless chicken breasts in the crock pot with a can of  chicken broth and some Herbes de Provence  and set it on low for the day. My original plan was to make chicken and rice soup.

Then I remembered some shrimp in the freezer I needed to use up, so I dumped them (raw and in their shells) in boiling water for four minutes and let them cool…then peeled them. Debated making it chicken and shrimp soup but the thought of curry suddenly occurred to me. A chicken and shrimp curry with rice in the crock pot….but it seemed like there should be a saucy component and maybe another dash of color.

I peeled and cut up a couple carrots and threw them in the pot an hour before supper time. Added the peeled shrimp about fifteen minutes before eating, just to heat them through.

A quick bit of melted butter, a little flour, and unsweetened coconut/almond milk…and the curry powder, heated to thicken and then added to the crock pot.

And by golly, it was good. Except the rice didn’t quite get done. And it didn’t have enough salt for my taste. And it could have used a bit more curry and maybe a bit of red pepper for a little zing.

How creative are you in the kitchen? Do you make up a lot of your own recipes or follow a cookbook’s instructions to the letter?