I started posting these resolutions on my Facebook page and now hope to lure a few more visitors over here to read the whole list. Making resolutions has always been a useless endeavor for me because I made the list too long, the goals were too ambitious, and I felt way too pressured to get it right. I failed regularly. This year, I’ve chosen to create a list of ten things I resolve not to do. And, of course, I made the list extremely easy for me to achieve.

One:  I resolve not to go skydiving…ever. 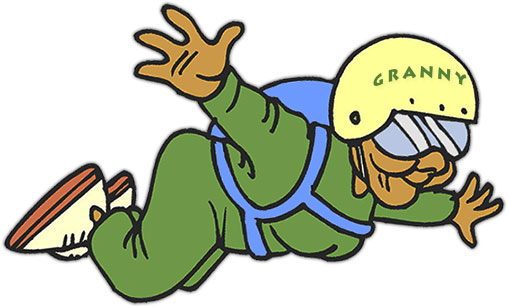 I’ve watched the elderly George H. W. Bush do it on his birthdays and have concluded the man has a death wish. If I were his age, I’d be doing everything possible to stay alive. As a matter of fact, at my age I’m doing everything possible to stay alive. If I tried to jump out of an airplane, even with a parachute and expert co-jumper, I think I would die as soon as I felt my feet leave the plane.

I already avoid doing that, although I weakened a time or two and attempted to be the voice of reason by leaving a correction on someone’s moment of craziness on Facebook. Why bother? The folks who post that stuff are preaching to their choirs and they don’t give a rat’s patootie whether I disagree or know the update is untrue and/or simple propaganda.

Three:  I resolve not to go ice skating, skiing, or train to run in a marathon.

I broke a bone in my foot in March and had a screw put in it, thereby losing three months of mobility. In October, I had knee replacement surgery, and lost a couple of months to healing and physical therapy. Any activity where I might damage myself or my new knee is verboten because I really don’t like pain.

Four:  I resolve not to buy any little gadgets in 2016, and that includes smart phones, smart watches, smart glasses, and that Fitbit thingie.

Why does anyone want to be tethered to all this cute technology? I have a stupid phone for emergencies, and a tablet for reading ebooks or accessing email when I travel. That’s enough! Even the pedometer annoyed me with its insistence I walk 10,000 steps a day so I sure as heck wouldn’t put on one of those fitness trackers.

Five: I resolve not to jump in an ice cold lake during one of those insane Polar Bear plunges (or any ice cold lake or river anywhere on earth, for that matter).

Who does that? Once when we were young and stupid, my brother and I chopped our way through the ice in a row boat to rescue my parents’ pug who had walked out on the ice and fallen in. We saved the dog, and I’d probably do that again, but just jump in water that cold for the fun of it? I don’t think so.

Six: I resolve not to drive in a Nascar or Grand Prix or Formula One or any other kind of car race.

Back in 1985 my husband and I attended the Grand Prix in Monaco. The cars would roar by in front and then behind the bleachers where we sat. I’ve also been to the Indy 500 time trials.  It’s exciting and exhilarating and terrifying just watching. The thought of being inside one of those cars going full speed around the track takes my breath away. It could even be worse than sky diving.

Seven: I resolve not to clean Katie Cat’s nose prints off the window more than twice a year.

The real resolution, of course, is not to obsess over cleaning house, including dusting, vacuuming, and washing windows and blinds. If I kept this house really clean, I’d never have time to write.

Eight: I resolve not to eat black walnuts.

It’s weird–I love English walnuts but find black walnuts disgusting. The taste is so vile to me I have to spit out the offending food if I’ve taken an unsuspecting bite of a black walnut. Usually I can identify them from smell so the spitting thing doesn’t happen very often.

Nine: I resolve not to answer the phone, especially during this election year, unless I recognize the name or phone number on our caller ID and really want to answer.

I’ve been working on this for quite a while and must admit I experience sheer pleasure when I choose not to answer the phone.

Ten: I resolve not to break any of my 2016 resolutions.

So what do you think? Any thing else come to mind that you can resolve not to do in 2016? A couple of folks on Facebook mentioned bungee jumping. That’s a good one. I’m not going to do that either.