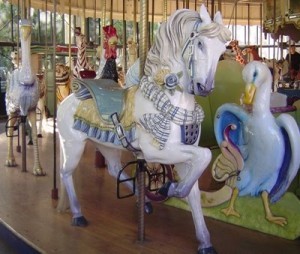 A little homework on blog improvement tells me the more posts, the better. That means at least five times a week. Apparently the posts don’t have to be long or full of awesome content.

I’m good with that.

Coming up with awesome content in a world full of bloggers writing great posts is hard. If I’m going to be that creative, I’d like to be working on a book instead. But if one is going to ride the carousel, one must get used to going around in circles (blogging, Facebook, Twitter, Google+, Goodreads, blogging, Facebook, T…).

Telling writers how to write has never been my thing, mostly because I find the process mystifying and overwhelming at times. I’m not sure how I do it when I do it well, which does happen from time to time. Maybe it’s just getting in the zone? Or listening to the voices in my head? Or an alien force (or one of those spirit guides) takes over my keyboard and does all the work?

That would be a bit like putting my fingers on a player piano and pretending I created that great music.

Honestly, I don’t know how writing happens, and that’s why you won’t get a bunch of “how to” posts from me. What I do enjoy, however, is hearing how other writers approach their craft. And that’s why I invite guests to post here. They know what they’re doing. I don’t.

I get into wrestling matches with my characters and they usually win. I kill them off unexpectedly when I don’t like what they’re doing.

I make a total mess of my timeline (which drives some of my critique group members crazy).

I keep changing character names as I go.

I rewrite dozens of times and end up with multiple versions of a novel in its folder.

I have a terrible time declaring a manuscript “done.”

That’s enough of that, but hopefully it explains why I don’t offer up writing advice.

So the dilemma becomes what should I post about if I need to update the blog at least five times a week? How the k-cup for the Keurig totally exploded this morning, spewing coffee grounds and muddy liquid all over the machine and into my cup? And since I was in the wheelchair (yes, one more week to go with this foot cast), I had to stretch to reach paper towels and then stretch the other way to clean up the mess I’d made? And how I had coffee grounds still showing up in my next two cups of coffee?

I can’t even make that one sound funny.

So let’s go back the the subject of writing. If you’re a writer, do you have a clue how it all happens? Aliens? Spirit guides?