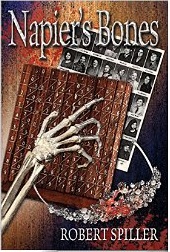 I was a big fan of the first two Bonnie Pinkwater novels, so when I heard Spiller was publishing book #5 in the series, I was eager to get caught up on the series. Each of the book titles is based on mathematics, so it should be no surprise that the author, as well as the series protagonist, is a math teacher.

That might have put off a less-than-happy math student as I was in high school, but Robert Spiller is a Colorado writer and a member of a couple of my favorite organizations….and he appeared on a few of the “Mystery Through the Ages” panels that made the rounds of book stores and libraries 2007ish.

My lack of love for math left over from high school is a whole different story for another day. Lured into reading the Bonnie Pinkwater mysteries after I met Mr. Spiller, I discovered math wasn’t so bad after all. Happily, Spiller spends a little time  on math problem-solving but a lot of time on murder and crime-solving.

I found Napier’s Bones the best book in the series so far. That might be because of the new characters introduced for this book, characters who are unusual and very interesting. They make the story edge into thriller status and a teensy bit away from cozy mystery. As for Bonnie Pinkwater, she’s a little spiritual, a little cynical, a little sarcastic, a little sad, but a lot clever and logical and a lot loyal to her dear friends, many of them former students. She’s a person I would like to know.

Spiller opens his novels with a jolt and doesn’t stop with the plot complications and character reveals. You can certainly read Napier’s Bones as a standalone, but I recommend you go back and pick up the first book (The Witch of Agnesi)and read straight through the series (A Calculated Demise, Irrational Numbers, Radical Equations, and Napier’s Bones).

Here’s the short synopsis from Amazon.com:

When a skeleton is unearthed in a field next to East Plains High School, math teacher Bonnie Pinkwater is thrust into a three-decade-old murder. What she uncovers are Satanists, ruthless mercenaries, murderous homecoming queens, a crazed mother, a fateful blizzard, and the death of someone near and dear to her. As her once considerable gifts of memory and deduction are eroded by the trauma of loss, Bonnie must solve a thirty-year-old cold case before the killer decides the best way to remain free is to add one female mathematician to his list of victims.