THE SPOILT QUILT AND OTHER FRONTIER STORIES: PIONEERING WOMEN OF THE WEST
ISBN-13: 978-1432864293
Hardcover and large print
Contains “Good Work for a Girl”

Pioneer women lived in harsh times and difficult conditions, so not all of the stories in this collection have happy endings. However, the title story is by the wonderful Sandra Dallas, both male and female authors have written great characters and plots,

In the early 1800s in a village on the Illinois frontier, young Jo Mae Proud wishes her cruel brother dead. Forced into prostitution by Caswell, Jo Mae discovers she is pregnant and vows to escape.

When Caswell is injured by a near lightning hit, he becomes more dangerous, and more hated. The flawed residents of the Village of Sangamon harbor many secrets. Caswell knows them all. Will he tell?

Jo Mae runs away and eventually finds shelter with Fish, the old Kickapoo Indian who camps by the river. Wishing Caswell Dead is a historical mystery about the evil that hides within a village, one girl who is determined to save herself and her child, and a violent murder no one wants to solve.

Newlywed Lynnette Foster’s cop husband punches her in the face, but this first assault will be the last. She leaves him and boards a flight from Miami to Los Angeles.

At the airport, a foul-mouthed thug known as Fat Ass Sammy Grick carelessly switches Lynnette’s laptop case and his own. Sammy’s boss sends a hit man to recover his property.

To complicate Lynnette’s life, eleven-year-old Grace McCoy follows her off the plane during the Denver layover. When Lynnette discovers her husband was murdered a few hours after she walked out and she’s a person of interest, a killer is hunting her down, and she needs to protect the runaway child as well as herself, she doubts her life will ever be normal again.

Dead Wrong was a finalist in the thriller category for the 2015 Colorado Book Awards. 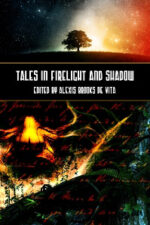 “Tales in Firelight and Shadow is a collection of short stories by well-known and fresh new writers of fantasy, speculative and science fiction, retelling folktales from many lands and cultures. Award-winning authors present challenging new twists on familiar tales: James Morrow’s museum curator and his university professor daughter discover the ultimate answer to the human condition; Mary Turzillo’s talking cat rats on a legendary illusionist; and Tenea D. Johnson’s fairies deal with the dream dolls of nightmare.

Writers testing the speculative waters with their risk-taking styles captivate and enchant us: an adventurous young professional tries out a new eatery, with disastrous results; a haunted lake binds the horrors of the slaveholding past to the land’s future; a boy steals what a Scottish fairy has no intention of parting with. A lonely girl in a beachside shack yearns for a mermaid godmother’s gifts. Shadowy stalkers haunt forests and dreams.

Emerging novelists delight us with old tales never before told like this: Jason Parent’s Salem shyster outsmarts his own self; Patricia Stoltey’s ogre is not at all what—or who—we think; Christina St. Clair’s loving wife on the ultimate spiritual quest seems to have gone horribly astray; and A.J. Maguire’s scientist alone on the moon with her husband and the man she truly loves must come up with the courage to choose if and how she will survive. We discover that fairytales and urban legends are the stuff of personal memory.

The folktales gathered and retold in Tales in Firelight and Shadow answer the oldest of our questions: “Why is my world as it is, and how can I find my way through it?” For, if folktales exorcize the pain of lessons learned over many lifetimes, then in this world of fairy, flame and chaos, enchantment—we realize with a start—is the only reality. We dream so that we may open our eyes.”

A body in a bathtub is the last thing Sylvia Thorn expects her mother’s travel club to find when they check into their Laughlin, Nevada hotel rooms.

The Florida Flippers, named for their long-standing support of the Miami Dolphins, scatter like dandelion fluff, intent on investigating a murder case to which they have no apparent connection. From the elderly wannabe cowgirl with wild red hair to the caustic-tongued volunteer park ranger in orthopedic hiking boots, the Florida Flippers keep Sylvia on her toes as she does a little sleuthing of her own.

But when the Laughlin detectives want to interview the Flippers, one of the elder travelers and her rental car are nowhere to be found. The tour group soon makes a grim discovery at the Lone Cactus Gold Mine near Oatman, Arizona, and Sylvia realizes there may be a connection between her mother’s club and the body in the tub after all. To add to the confusion, and Sylvia’s internal turmoil, the handsome and much younger FBI agent, who tormented her in so many ways in Florida, is now in Laughlin showing intense interest in her group’s activities.

Soon Sylvia’s brother, reluctant clairvoyant Willie Grisseljon, senses trouble. Prompted by his father who is equally alarmed, Willie abruptly abandons his bachelor weekend in Florida and flies to the rescue. Willie soon wishes someone would rescue him instead.

The Desert Hedge Murders is a tangle of puzzling events that seem to have no connection … until Sylvia and the Florida Flippers stir up so much trouble that Laughlin detectives, the Mohave County Sheriff, and the FBI are forced to work together to reveal the missing pieces.

Sylvia Thorn, circuit court judge in Palm Beach County, Florida, takes an unexpected trip to her hometown of Sangamon City, Illinois when her older brother, Willie Grisseljon, is confined to a county hospital for a psychiatric evaluation. A Vietnam vet with lingering side effects from the war, Willie finds a body while he’s on vacation. When he tries to report his discovery to a deputy sheriff, he is locked up as a vagrant with delusions.

Willie insists on returning to the site where the body is hidden before notifying the sheriff. Soon he and Sylvia discover clues about the murdered businessman, his wife, a tenant farmer, concealed Indian artifacts, and uprooted stands of prairie grass that may help the sexy sheriff find the murderer. But Sylvia runs into trouble when she’s caught nosing around the old homestead. She hides from the gun-toting suspects and overhears another murder. Two more narrow escapes, and Sylvia just wants to go home.

Relieved when the sheriff lets them return to Florida, Sylvia doesn’t realize at first that she and her brother are still in danger. A mysterious new neighbor with a menacing bodyguard, and new information Sylvia finds in her legal system database, provide clues that could solve the murders. Sylvia uses her law enforcement contacts, as well as Willie’s intuitive skills, to provide the missing links to state and federal authorities, even though she is forced to make a drastic change in her life as a result.