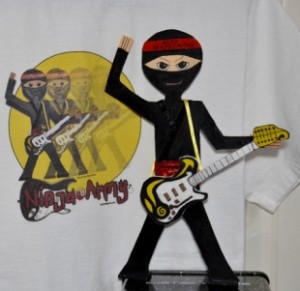 This will amuse you – I never wanted to be an author.

True story! I wrote some when I was younger, but it was never my goal. I had other passions in my life. But I found that old manuscript in a drawer and decided to rewrite it. Then my wife pushed me to submit it, and to my amazement, a publisher said yes. Next thing I know, I’m writing another book, and then another…

Writing is usually a writer’s favorite thing. The marketing part… not so much.

I’m uneasy about touting my books on my site. It’s much easier to promote others. I am open to guest posts and letting other authors take the limelight. I started the Ninja News where I mention new book releases by my fellow authors. I sign up for launches and Thunderclaps and send out Tweets.

Probably the biggest thing I did was launch the Insecure Writer’s Support Group. It started as a monthly posting, the first Wednesday of every month. When it grew to three hundred participating blogs, I knew I had to take it to the next level. With the help of six amazing admins, we launched the IWSG website, a database of databases, and started a Facebook group. Soon that became two Facebook groups and last fall, we published the Insecure Writer’s Support Group’s Guide to Publishing and Beyond. 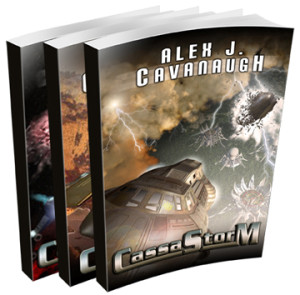 I’ve also been a part of the A to Z Challenge team for five years now. And every year, I feature and promote fellow blogger buddies as part of my theme.

The results from all of this? Well, it still boggles my mind…

Right after I started the IWSG, my first book, CassaStar, shot to the top of the Amazon charts.

The third book had almost a hundred and seventy people signing up for an interview question to be posted on the day of its release. It also shot to the top of Amazon’s charts.

This past April, in the middle of the A to Z Challenge, my fourth book was released, and dozens signed up for a scavenger hunt, sending Dragon of the Stars to the top of the Amazon charts. There was also a Thunderclap campaign, plus hundreds of Tweets about the book’s website, What Are the Kargrandes? People are still mentioning my book and my tour continues into July.

How did all of this happen? I believe it was because I put others first and promoted their works. I was a cheerleader, never expecting anything in return or doing it so I could call a favor later. I did it because I truly care about others, and I know how hard it can be to get the word out about a new book.

So my advice to you – you want to succeed in this business? Be a cheerleader. Be the best damn cheerleader anyone has ever seen! 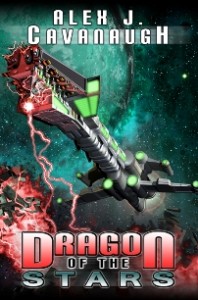 The ship of legends…

The future is set for Lt. Commander Aden Pendar, son of a Hyrathian Duke. Poised to secure his own command and marriage to the queen’s daughter, he’ll stop at nothing to achieve his goals.

But when the Alliance denies Hyrath’s claim on the planet of Kavil and declares war on their world, Aden finds his plans in disarray. Entrenched in battle and told he won’t make captain, Aden’s world begins to collapse. How will he salvage his career and future during Hyrath’s darkest hour?

One chance remains–the Dragon. Lost many years prior, the legendary ship’s unique weapon is Hyrath’s only hope. Can Aden find the Dragon, save his people, and prove he’s capable of commanding his own ship?

Purchase Dragon of the Stars at Amazon.com, Barnes and Noble, ITunes, Kobo, and Amazon UK.

Alex J. Cavanaugh has a Bachelor of Fine Arts degree and works in web design, graphics, and technical editing. A fan of all things science fiction, his interests range from books and movies to music and games. Online he is the Ninja Captain and founder of the Insecure Writer’s Support Group. He’s the author of Amazon Best-Sellers CassaStar, CassaFire, and CassaStorm.

Learn more about Alex at his blog. He can also be found on Goodreads and Twitter.