I have chosen to title this post no glass ceiling because it sums up the main reason why I am an author, and why I write: there is none in writing. That is because writing is a process, it is an act of engagement with the subconscious. You can never reach the top. There is no top. You are always learning. And how many professions can you say that of? That is why it is endlessly challenging and endlessly rewarding.

I am best known as the author of several crime novels, some of them mysteries, some police procedurals. Apostle Rising, Mr. Glamour, Wrong Crowd, Savage Highway are the main core crime novels, all different. Apostle Rising is about a serial killer who is crucifying politicians in London and re-enacting murder scenes from an old case. The Detective in charge of the investigation failed to catch the Woodlands Killer many years ago and now suspects the man he believes was responsible, Karl Black, is behind the current killings, but there is a big shock in store for him and his team. Mr. Glamour is about a group of beautiful people who are being preyed on by a killer who is obsessed with designer goods and brands. In the sub-plot a middle class housewife is leading a double life that brings her into contact with the first crowd. Wrong Crowd is a hard boiled London crime caper about East End villains and the Russian Mafia. At the centre of the story is an Art thief’s obsession with a beautiful woman with no past whom he meets while on holiday in the Caribbean. In Savage Highway women are disappearing at truck stops in a remote part of Arizona and a journalist discovers that law has broken down in the area. 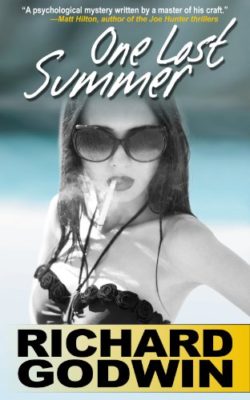 One Lost Summer is my most Noir novel. It is about a film maker who moves into a new area in the middle of a heat wave with few possessions apart from two pictures of his dead daughter. He finds himself living next door to the beautiful Evangeline Glass and he becomes convinced that she is someone other than who she is pretending to be, that she is in fact a woman called Coral, and so he blackmails her into playing a dangerous game of identity that ends in disaster. It has been called extremely Hitchcockian.

Noir City is the Erotica novel I was commissioned to write. It is about a dangerous Gigolo called Paris Tongue who seduces the wife of a Mafia boss and is hunted across Europe. When I was asked to write it the publisher wanted me to focus on key cities across Europe. Each section of the novel captures the atmosphere of the cities that Paris Tongue uses to seduce women in London, Paris, Rome, Madrid, and Dusseldorf. A new revised of the novel is now out, in which there are more scenes about just who the dangerous Gigolo is. I am also writing a sequel to it.

Confessions Of A Hit Man is an action novel, a high octane thriller about an ex-Commando globetrotting assassin Jack. Things are going well for Jack as he takes out hits for the Sicilian Mafia, then he gets drawn into a government plot selling plutonium to Syria and becomes a target himself. He rescues a woman from a deadly situation and starts an affair with her, then he has to hunt his hunters down. But the political plot goes far deeper than he realised and it goes to the heart of the government.

Meaningful Conversations is a transgressive satire. It is about the well-adjusted killer Bertrand Mavers, classical cellist, who may be undergoing therapy or using a paradigm to subvert the social system as he abducts people and takes them to a place called The Farm. Paranoia And The Destiny Programme is sci fi. It is about a man called Dale Helix who believes he is being abducted by a shadowy group of rulers called The Assembly and being forced to kill Automata. The problem is no one believes him because the entire population think they are living in a Utopia. The dystopian novel is an exploration of the link between serial killers and dictators.

Ersatz World is about an old fashioned publisher trying to resist the lure of ebooks, and who is married to a woman suffering from body dysmorphia. While his wife fills the hallway with prosthetic limbs, Samuel Verso discovers his problems may run deeper than books on a computer screen and that the problem isn’t that he is paranoid, it is that he isn’t paranoid enough, as he is arrested for a terrorist plot against London.

Disembodied is about the virtual world and technologised man, it is about physicality and what it means in the modern age. It is also about voyeurism and state surveillance.

The Pure And The Hated is a revenge tragedy and a crime novel. Set in rural Vermont it is about a man who is grieving the death of his son in a hunting accident and who finds a stranger freezing in the forest one day. When he invites him into his home he releases a savage lesson from the past. This is a lyrical and psychological novel about family secrets and predation.

They are all different in genre and style. I believe my novels appeal to the American market as well as the European because many of them are written in an American style. There are more coming. Buffalo And Sour Mash is coming out later this year, with Locked In Cages following soon after. If you want to find out more about me and my novels go to my website.

Richard Godwin is the critically acclaimed author of Apostle Rising, Mr. Glamour, One Lost Summer, Noir City, Meaningful Conversations, Confessions Of A Hit Man, Paranoia And The Destiny Programme, Wrong Crowd, Savage Highway, Ersatz World, The Pure And The Hated, Disembodied, Buffalo And Sour Mash and Locked In Cages. His stories have been published in numerous paying magazines and over 34 anthologies, among them an anthology of his stories, Piquant: Tales Of The Mustard Man, and The Mammoth Book Of Best British Crime and The Mammoth Book Of Best British Mystery, alongside Lee Child. He was born in London and lectured in English and American literature at the University of London. He also teaches creative writing at University and workshops. You can find out more about him at his website www.richardgodwin.net, where you can read a full list of his works, and where you can also read his Chin Wags At The Slaughterhouse, his highly popular and unusual interviews with other authors.