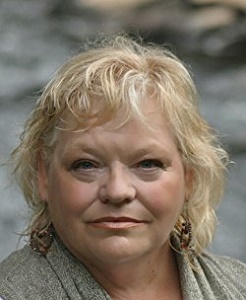 Like the main character, Ava Logan, in Tell Me No Lies, I owned a small town newspaper. Where Ava has a small staff, for the most of the thirteen years of publication, I ran the Pleasant Garden Post solo. I did have an intern once who didn’t understand the concept of intern and requested a salary of more than what I was making. I did have delivery people through the years simply because, well, I just didn’t want to do it.

The Pleasant Garden Post, or Post, as people came to know it, had a circulation of 5000. Not bad for a town that measured about 8 square miles and boasted a population of 4,500. The paper covered the other surrounding unincorporated communities so the reach was greater than the town limits. And every one of those communities, including the town itself, had ten churches on every corner. It wasn’t unusual at all to have a Baptist corner and a Methodist corner facing one another.

Fall was always the busiest time for the paper. Every church, civic organization, boy scout and girl scout troop held some kind of fall festival. And there was always a pumpkin patch somewhere in the general vicinity. I must have taken near a thousand pictures of massive pumpkins homegrown by our local farmers, each one boasting their’s was the largest. 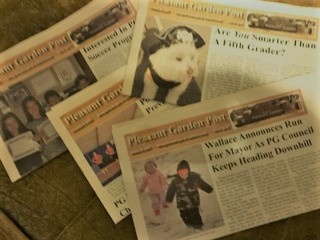 The variety of news stories I covered back then is pretty impressive. And the manner in which they were brought to my attention is often just as interesting. Had a guy, good ol’ boy type in his camo pants and blaze orange sweatshirt, come to the office once and asked me to come outside as he had something to show me. So I go outside with him and sure enough, there in the bed of his pickup is a bunch of fish he’d just caught. No cooler. Just flopping around in the bed of his truck. He wanted me to do a story on the number of fish he’d caught. Then he offered to give me a few as payment. 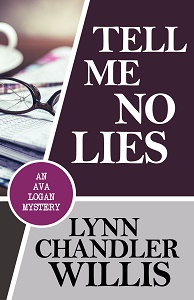 Flash forward a few months, same guy comes by again. Asks me to come outside again. I should have learned the first time. It wasn’t fish this time, though. A coyote he’d shot and killed stretched from one end of the tailgate to the other—not including the tail. The animal had to have weighted well over 100 pounds. I did not know coyotes grew to that size. Made them a little scarier.

Then there was the mayor who objected to an article I wrote criticizing him, so he banned the Post from being distributed in the town hall—while allowing other newspapers. Rumblings of ‘legal action’ and the paper was welcomed once again back in the town hall while the mayor was soon after removed from office.

The tragedies and bright spots, the getting cussed out because you spelled someone’s name wrong, the smile on a kid’s face when their name is spelled right when showcasing the elementary school honor roll, and the obituaries that covered two pages I ran for free because I never could bring myself to charge someone in a time of grief.

I did charge for wedding announcements, though.

Lynn Chandler Willis has worked in the corporate world, the television industry, and owned a small-town newspaper. Her novel, Shamus-Award finalist, Wink of an Eye, (Minotaur, 2014) won the SMP/PWA Best 1st P.I. Novel, making her the first woman in a decade to win the national contest. Tell Me No Lies is the first title in the Ava Logan Mystery Series with Henery Press. She lives in North Carolina with a border collie named Finn.

Learn more about Lynn and her books at her website/blog. She can also be found on Goodreads, Facebook, Twitter, and her Amazon Author page.

About Tell Me No Lies

Ava Logan, single mother and small business owner, lives deep in the heart of the Appalachian Mountains, where poverty and pride reign. As publisher of the town newspaper, she’s busy balancing election season stories and a rash of ginseng thieves. And then the story gets personal. After her friend is murdered, Ava digs for the truth all the while juggling her two teenage children, her friend’s orphaned toddler, and her own muddied past. Faced with threats against those closest to her, Ava must find the killer before she, or someone she loves, ends up dead.