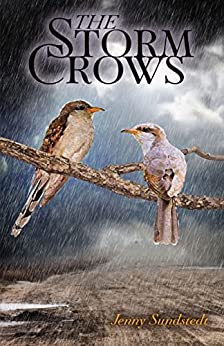 In Jenny Sundstedt’s novels, Passing Through and The Storm Crows, counselors in an afterlife waystation provide advice and therapy for people who’ve died but have unresolved issues that prevent them from moving on. In The Storm Crows, Eugenia Kratt is the supervisor who tries to keep everyone, both clients and counselors, on the right path. When a new client shows up, claiming she’s not dead yet, the result is complicated. The new client is called Jane Doe because she remembers nothing about her life or the circumstances that led to her appearance midway between life and death (if she’s truly not dead yet).

Counselor Kate Smith is given permission to re-enter the living world, hire an investigator named Sean Callahan to help find Jane Doe’s true identity and her life status. Kate knows Sean worked with another afterlife counselor on a previous case, so she tells him who and what she really is. Against his better judgement, Sean takes the case.

Kate has secrets, however, that she keeps from Sean and from her supervisor Eugenia. But Eugenia and another counselor, Amanda, are suspicious of Kate’s behavior and her extended absence. The two also re-enter the living world in an effort to track down Kate and protect Sean from Kate’s true self.

Sean suffers a lot of angst in these encounters with dead counselors who appear alive and healthy, but there are parts of the novel where humor takes the wheel.

The Storm Crows is an excellent, well written mystery with an intriguing sub-plot. The characters and their dialogue (even though some of them are dead) are realistic, and the settings at the waystation and in real life are well drawn. I thorough enjoyed The Storm Crows and thought it was fine as a standalone, but I have ordered a copy of Passing Through to fill in the blanks of the backstory. Highly recommended.

I received a free copy of The Storm Crows for an honest review.