We don’t need to tell smart, intuitive readers everything and we rarely need to tell them details more than once. They will fill in the blanks as long as the blanks are not critical to the story. You can describe a protagonist (male) as 60ish with long gray hair, bronze skin, and a leathery, weathered face, and the reader will know what your American Indian character looks like. But if you say he’s an Arapahoe elder, won’t the reader form a similar mental picture without all the extra words?

Adverbs are the most likely candidates for elimination. Many can be found by searching on the letters ly. Examples of words you might find are silently, carefully, actually, and quietly. In the sentence, “He silently crept across the room in his stocking feet,” the word silently can be eliminated without changing the meaning. “Crept” implies carefully, silently, and slowly.

Since not all adverbs and adjectives can found so easily, this step may be combined with others in your sentence-by-sentence editing read. Look for redundancies, such as emerald green eyes or huge, cavernous room. Emerald and green tell the reader the same thing, as do huge and cavernous.

Adjectives that are quantifiers or indicators of size are often too general to be useful. Words such as large, small, big, tall, short, huge, some, many, and most are examples. “Some” is the word I find sprinkled throughout my own manuscripts as well as those I critique for others. It’s best to use precise measures or quantities instead.

Not all adjectives and adverbs are bad, of course. In some cases, details are important to the story and may even be clues or red herrings in mysteries or thrillers. In other cases, a character’s appearance might explain his odd behavior. Sometimes descriptive words are needed to create a mood. Even so, use adverbs and adjectives in moderation and be precise. Don’t use two or three when one will do the job. 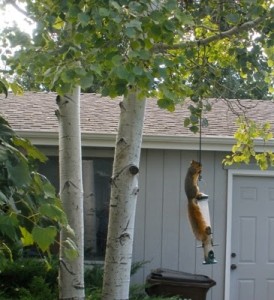 An exercise:  Write an accurate description of the above scene using the least number of adjectives and adverbs possible. What adjectives or adverbs would you have liked to use? How important would they be in a story about a bird lover’s war with squirrels?