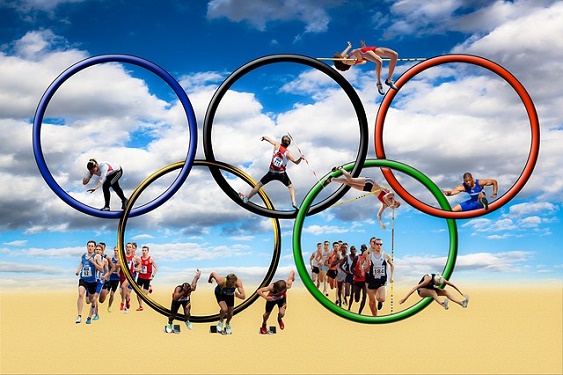 Even more than being a political event junkie, I’m an Olympics addict. I’m doing my best this year to avoid staying glued to the television for as many hours as I have in past years. So far, I watched some of the opening ceremony, a little swimming and a lot of gymnastics. I checked in on a couple of basketball and volleyball games just to see the scores. And that’s it.

I should get some kind of gold star for restraint.

The colors and designs in Rio’s opening ceremony were eye-catching. Even Sassy Dog parked herself in front of the television to watch. She also like the gymnastics, probably because of all that running and leaping and jumping.

The main problem with the dog watching TV is her insatiable curiosity about what happens to stuff that goes off the left or right side of the screen. Sassy has investigated under the TV, and even peered around behind it. She cannot understand where those little people go.

The words scrolling across the bottom of the screen are really confusing for her. I’ve tried to explain, but she doesn’t get it.

Katie Cat sometimes watches Sassy watch TV, but she doesn’t have the same interest the dog does. Except for football. Katie has been known to jump up on the TV stand to watch that ball fly through the air. However, as soon as she realizes it’s not a fly or moth, she loses interest.

Sassy will watch almost anything but especially loves animals and fast-moving cars. Commercials are her most favorite thing. And giraffes. She really like giraffes.

As for me, I’ll continue to focus on the gymnastics. Especially the girls. I can’t even imagine the time and dedication it takes to become the superstars they are.

Are you an Olympics sports fan? What events do you watch?