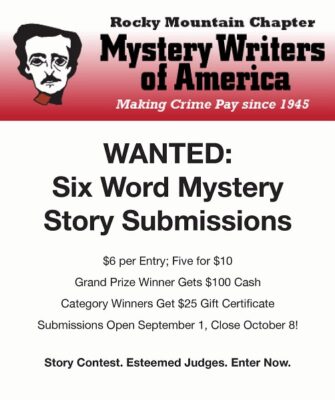 Rocky Mountain Mystery Writers of America sponsors a six-word mystery contest. Doesn’t that sound like fun? This is the fifth year for this competition which is growing in popularity and drawing entries from all over the world. The contest logo is above, but you can’t really “enter now.” Mark your calendar so you don’t forget to enter September 1st. Here’s the skinny from rmmwa.org:

Can you write a whodunit in six-words?

There are short stories. Then there are really short stories of only six words. Writers who can boil down a mystery into a half-dozen words are encouraged to enter the fifth annual Six-Word Mystery Contest sponsored by the Rocky Mountain Chapter of Mystery Writers of America (RMMWA).

The contest opens September 1, 2021. Entries must be received by midnight, Oct. 8, 2021, MST. Six-word “whodunits” can be entered in one or all five of the following categories: Hard Boiled or Noir; Cozy Mystery; Thriller Mystery; Police Procedural Mystery; and/or a mystery with Romance or Lust. The Six-Word Mystery Contest is open to all adults 18 and over. No residency requirements.

Award-winning author and RMMWA Chapter President Margaret Mizushima said, “Follow the tradition set by Hemingway in the 1920s with your own boiled-down intriguing mystery, written in just six words and be judged by professional writers, editors, and agents. Writers from across the nation as well as Europe, Asia and Australia have entered our previous contests. We’re excited to see what big and fun story ideas are revealed this year.”

The contest entry fee is $6 for one entry (just $1 per word); or $10 to enter six-word mysteries in all five categories. The grand prize winner will receive $100 in cold, hard cash. Winners in all other categories will receive $25 gift certificates, and all winners and finalists will be featured in Alfred Hitchcock’s Mystery Magazine, on our RMMWA website, and in our popular monthly newsletter, Deadlines.

Participants will be invited to the chapter’s annual Mystery & Mistletoe Holiday Party, which will be held live and on Zoom in December.

According to legend, the first six-word novel was born in the 1920s when Ernest Hemingway at New York’s Algonquin Hotel or Luchow’s restaurant (depending on whom you ask) won a $10 bet by writing a six-word story. His dark and dramatic submission was: “For sale: Baby shoes. Never worn.” Urban legend or no, memorable, heart-breaking, and sublime six-word stories have been penned ever since.

There are many, many excellent writers from New Mexico and Arizona (or who write books about/set in those states) in the writerly organizations I’ve joined, so I want to pass on this announcement for those who might be interested:   The New Mexico Book Co-op is pleased to announce the 15th annual New Mexico-Arizona Book …Read More

I’m hooked on quite a few mystery series and mentioned a few authored by writers from Colorado and the Rocky Mountain region when I put together my January post for the Blood-Red Pencil blog. I hope you’ll drop by and check out my list, trying a few of these fine series if the description appeals …Read More

I had knee replacement surgery on November 11th, 2019, and knew there were plenty of tasks I’d have to give up for two or three months. Blogging turned out to be the first activity to happily sit on the sidelines. The blog waited patiently for my return. As did the gym at the Senior Center. …Read More

I had the best time ever on Friday evening when I read excerpts from Wishing Caswell Dead at the 2018 Colorado Book Award finalist event for general fiction, literary fiction, and poetry categories. BookBar in Denver was the location. What a great place! A bar and a bookstore, all in one awesome package. I always …Read More