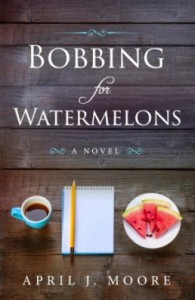 On March 19th, April J. Moore was my guest blogger with “The Power of Persistence.” In that post, she talks about the journey of writing Bobbing for Watermelons, a novel of women’s fiction, and how long it took before she knew she had it right.

Here’s a little more from my own point of view. April and I were students in a novel writing class way, way back in winter of 2003. When the class was over, several of the students decided to start a critique group to keep us motivated. April was one of the group’s founders, and I joined, too. Members have come and gone over the years, and now April and I are the only ones left from the original group. Still, Raintree Writers, seven members strong, continues–and one of our current members is the instructor from that original novel writing class.

Bobbing for Watermelons is April’s first novel, so I was part of the group that critiqued her early drafts. I have loved the main character, Helen Munson, since the beginning, and there have been several times during the process I thought the novel was ready for publication. Still, April kept working, kept revising, kept growing as a writer. She took a break from Bobbing to work on the nonfiction book, Folsom’s 93, which was published by a California company specializing in California history.

But then April came back to Bobbing for Watermelons. This is many revisions after I’d last seen the novel, so when she published through Hot Chocolate Press (owned by Northern Colorado Writers director Kerrie Flanagan), I was eager to read the book to see what was the same and what had been changed.

For one thing, there’s a new ending to the story (and it’s really good). Secondly, April can write poignant scenes that bring me to tears (three places in the book) in addition to keeping me chuckling at Helen’s thoughts and behavior. I don’t remember any tears during earlier drafts. The humor in the novel seems effortless, sometimes sweet and sometimes snarky. Helen is a much deeper character than she was in the beginning. And April is a wonderful storyteller.

If you like to read women’s fiction with humor, quirky characters, and a good story, try Bobbing for Watermelons. I’m giving it five stars on Goodreads and Amazon.com.

Here’s the book’s official synopsis. “In the small town of Brookwood, Iowa, forty-one-year-old food columnist Helen Munson, unappreciated by her two teenagers and her lazy husband, longs for more out of life, but hasn’t a clue how to make that happen. In fact, her tendency to overreact and put herself in embarrassing situations sabotages her own efforts to assert herself. Helen impulsively starts writing a spy novel whose main character exudes traits Helen tries to embody in her own life: power, assertiveness, and the ability to kick butt. However, this persona doesn’t quite manage to keep her out of trouble, or jail. With help from a cast of quirky characters, such as her hippie best friend, a free-spirited drifter, and a pair of fashionable gay store owners, Helen just might be able to pull off the transformation of a lifetime.”